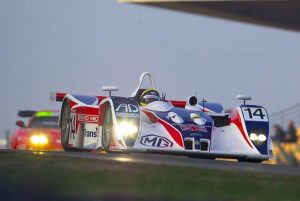 Brazilian-born but based in the UK, Thomas Erdos is one of the best-respected names in contemporary sportscar and GT racing.  For the best part of twenty years Thomas has been at the top of the game, consistently front-running in championships like the British GT, European & American Le Mans Series, and, of course, the Le Mans 24 Hours. He has a string of titles, lap records and pole positions under his belt, and has twice been a winner in the Le Mans 24 Hours. When he’s not on the race circuit, Thomas also works as a test and development driver for a number of major motor manufacturers, including Mazda, Volvo, Ford and Jaguar. He has recently been the leading “test pilot” for the remarkable NextEV Nio EP9, the world’s fastest electric road car, launched to rave reviews and some astonishment in London in November 2016. Mind you, it’s never exactly sedate with Tommy behind the wheel, and he’s much in demand as a film and TV stunt driver, working on leading projects as diverse as the London 2012 opening ceremony and music videos for the likes of Tinie Tempah.

With that kind of experience there’s so much to learn from a driver like Thomas Erdos. Through his tuition scheme, tailored for owners of high performance road cars, drivers learn advanced high performance techniques to ensure they get the most from their cars, safely and with confidence. Tuition is carried out not only on the road, but also at carefully selected race circuits. Clients benefit from Tommy’s 25 years of experience, as an instructor and an international racing driver, to learn the limits of their car and how to exploit – and control – its true potential.

The time comes in many a driver’s career when they realise that driving fast around a circuit, as part of a track day experience or under tuition from a professional like Tommy, simply isn’t enough. They’ve proven to themselves that they can control a car at speed, but now they want to prove it to everyone else. They want to go racing. In order to do so, they’ll need to qualify for a racing licence, and to achieve that, they’ll need to pass the test set by the Association of Racing Drivers Schools.

Tommy is a fully accredited ARDS instructor and has devised a bespoke, structured tutoring regime that will see a driver progress steadily, competently and with developing skill, from one stage to the other, and as far (and as fast) as their determination and abilities will permit. The preliminary Bronze course prepares a driver for the challenges he or she will face on the road, in day-to-day circumstances, and then hone them for the “track day” experience. Drivers who then complete the Silver course with Tommy will be well on the way to being prepared to face the ARDS test itself. The Gold course will lead them on to the next stage in their development, giving them not only the best chance of passing first time, but also of being prepared for their debut on track.  The driver who progresses successfully through each of these three levels will then be ready for the ultimate test – the Platinum level and racing to win.

If you feel that Tommy could help you set a course for a career on track, then contact him today. You can also find out more about his tailored tuition system by visiting the Thomas Erdos website, where there are additional details about each stage in the programme.